Water of the gods 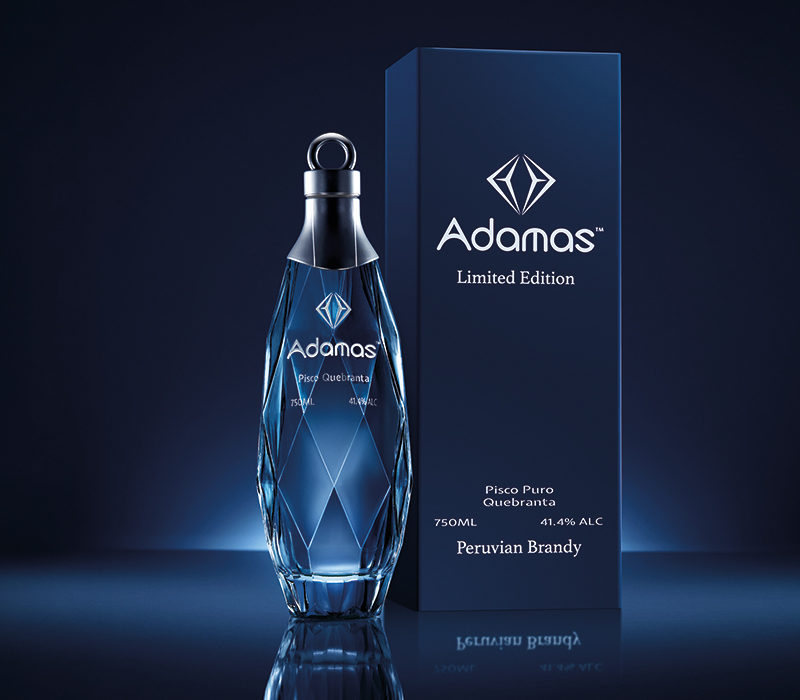 The husband and wife team behind Adamas Pisco are looking to revive pisco, the Peruvian brandy that was once San Francisco’s favourite spirit

In Peru, locals call pisco “the water of the gods”, while Rudyard Kipling believed this delightful Peruvian brandy might have been “compounded by the shavings of cherubs’ wings, the glory of a tropical dawn, the red clouds of sunset…” Whether heaven-sent or otherwise, Peruvians have been drinking pisco for centuries and the drink was once equally popular in the US, until it faded in popularity after Prohibition. But a renaissance is underway in the form of Adamas Pisco, a creative endeavour between Michael Meyers and his wife, Therese Corriente, which aims to restore pisco to public consciousness in the form of an artisanal product that is made with skill and care and packaged in a stunning diamond-shaped bottle that reflects the multi-faceted, precious spirit within.

“Adamas Pisco is very versatile,” says Therese. “It can be used to create a unique and flavourful cocktail, but its purity and smoothness mean it can be enjoyed as a chilled shot, neat or on the rocks.  We want people to explore and enjoy Adamas Pisco and so we designed a diamond-shaped illuminated bottle to attract our discerning audience.”

Not everybody’s first encounter with pisco can be as memorable as that of Therese and Michael. They were horse-riding on a friend’s hacienda when he pulled a bottle of pisco out of his saddlebag and suggested they have a sip. From that first electrifying taste they were galvanised to discover more about this great lost spirit. “We discovered this was a grape-based brandy made from certain grapes in a single area that, like champagne, is geographically controlled so you can’t call just anything pisco,” says Michael. “Our entrepreneurial instinct kicked in and we decided to produce our own. We wanted to create the most authentic drink, so we scoured the country until we found one particular farmer who had been there for more than 100 years on this incredible terroir. Over four generations, he has developed a unique approach to making pisco in the artisanal style.”

Adamas Pisco is distilled from freshly fermented Quebranta grape juice using copper stills and clay jars called piscos. Pisco has deep roots in Peruvian culture, particularly through the traditional “grape-stomping” ritual, when the local farmhands stomp on the grapes to extract the juice while singing and joking – and, of course, having the occasional drink. The juice sits in a saturation basin called a puntaya for 24 hours before the seven-day fermentation process, when the yeasts in the grape skin absorb sugar and turn it into alcohol. This is a carefully controlled process, with experienced pisco-makers striving to ensure the natural aroma of the grapes does not evaporate as this is highly valued in the best pisco. “The critical steps from the timing of fermentation, the selection of the clay pot and the control of maturation are all key considerations in the art of making a world-class pisco,” says Michael.

Pisco entered the US during the gold rush and became one of the most popular drinks in San Francisco in the form of the Pisco Punch cocktail. Indeed, it was said that the three things everybody had to do in San Francisco were ride a cable car, see the sun set over Golden Gate Bridge and drink a Pisco Punch. Mark Twain reportedly drank pisco with the man who inspired the character of Tom Sawyer, while Herman Melville wrote that although “Pisco does a deal of mischief in the world, yet… must we not also needs admit that sometimes pisco does a deal of good?”

Following Prohibition, Pisco never quite reclaimed its old heights and dwindled from public consciousness in the US, while retaining its grip on the domestic Peruvian imagination. Adamas Pisco intends to rectify this, ensuring that one of the great South American luxuries will once more become an international sensation. “We did taste-testing and there was simply no competition to match our Adamas Pisco, so we realised that with care and attention we could create something very special,” says Michael. “We use traditional methods, but have found ways to adapt it to suit the palate of the rest of the world. We really want to explore all the potential of this product as we introduce it to a younger global audience.”

Adamas Pisco is initially being launched in New York, California and Florida – three of America’s most adventurous states when it comes to high-end spirits. Michael and Therese are also confident it will be popular in London, which is similarly forward-thinking when it comes to new products and exciting cocktails. The opulent packaging is not only designed to attract attention, but also to signify that this is a luxury brand, which has been created with passion for an audience that appreciates authentic craftsmanship.

And the return of pisco to the US and Europe is not going to end here. “We are going to develop different flavours by blending several grape varieties, while maintaining the integrity of the product through our commitment to the process and the traditional methods of production,” says Michael.

“When you make a product that comes out of your relationship with your friends and a personal passion, it really comes through in whatever you are creating. This all started while horseback riding in the desert, when we first tried pisco with our friend and discovered this incredible drink. We are now able to share this product around the table with our friends. It’s all about that journey towards perfection and we are so proud of what we have achieved. Therese doesn’t even drink alcohol, but has acquired a taste for pisco through her passion to make this the perfect spirit for the world to enjoy.”