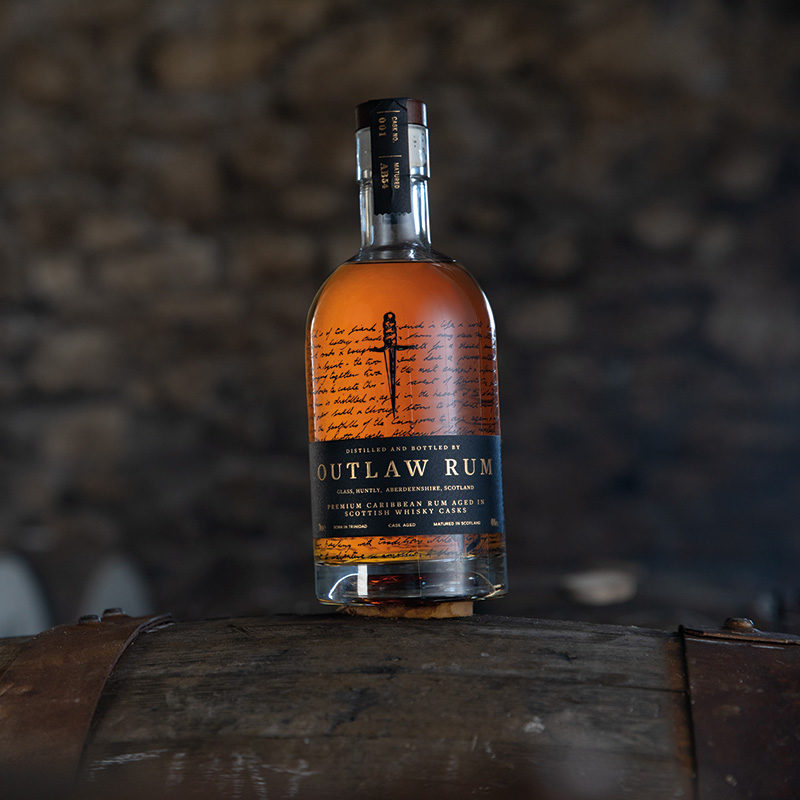 Expertise and daring define the Outlaw Rum Company, whose premium rum is created in Trinidad and aged in Scotland

In rural Aberdeenshire, on the coastal fringes of whisky territory, two spirited friends secretly ensconced oak casks of the finest Caribbean rum, and waited. A distinctive and thrillingly disruptive rum was set to emerge from the inclement climate and terrain of a region known for its illicit stilling activities – and in 2020, the aptly named Outlaw Rum Company was born.

The story began when Jim Ashley and Pat Maris spent four years living in Trinidad and Tobago, while working in the oil and gas sector. It was here that they first discovered their passion for rum. “To get a really good dram of rum in the Caribbean you need to know the right people,” says Jim. “Cask-aged rum is extremely elusive – it’s reserved for gifts and special occasions, and is even harder to get hold of outside the Caribbean.”

When Jim returned home to the UK and settled in Aberdeenshire, he suggested to Pat, half-jokingly, that they should import this premium cask matured rum, age it further in whisky casks, and take on the single malt industry in its own backyard. “Remarkably, he agreed to the idea,” says Jim, “so we went for it.”

Jim had a couple of possibilities in mind for their bonded warehouse, and he was confident that he could handle the business affairs – but he recognised that their biggest challenge would be to get a premium rum distillery onboard. “From the outset, we knew our finished rum would have to be able to compete with the calibre of Balvenie Doublewood whisky,” he says. “That was the bar we set ourselves when sampling rum in the Caribbean. We tried around 60 cask aged rum blends before we found the right one, from an exceptional distillery that trusted our vision.”

The rum is matured in the Caribbean, in 100 per cent humidity, where the temperature rarely drops below 28 degrees. Rum loses around 15 per cent of its volume during the ageing process, so premium rum is often blended. The Outlaw Rum Company’s first batch of 4,000 litres blended batches aged from three to 11 years old. Having now earned the respect of the distilleries, the pair also have privileged access to old stock options, from ten to 15 years old.

“When the rum arrives in Scotland, it undergoes a further maturation cycle in hand-picked whisky casks from Speyside Cooperage,” says Jim. “We select oak casks from different distilleries, based on the flavour notes we anticipate each cask will create. So, for example, if the rum is already heavy on vanilla and creamy notes, we won’t put it in a bourbon cask.”

The surprisingly complex character of Outlaw rum has astounded critics and whisky lovers alike. The rich creaminess and vanilla notes drift into a long finish on the tongue; similar to that of single malts but citrusy with a hint of cinnamon – flavours that are specific to rum. “We occasionally have experimental, limited-edition releases,” says Jim. “Islay, for example, is a fascinating rum that yaws between hints of wood fire, caramel and zesty orangeness, whereas our bourbon cask rum has an abundance of buttery vanilla notes. We also have some interesting double cask and quarter cask rum.”

The Outlaw Rum Company is set to maintain its spirit of disruption, with cask investment opportunities also on the horizon, as the daring duo continue to attract attention, earn respect and excite palates.