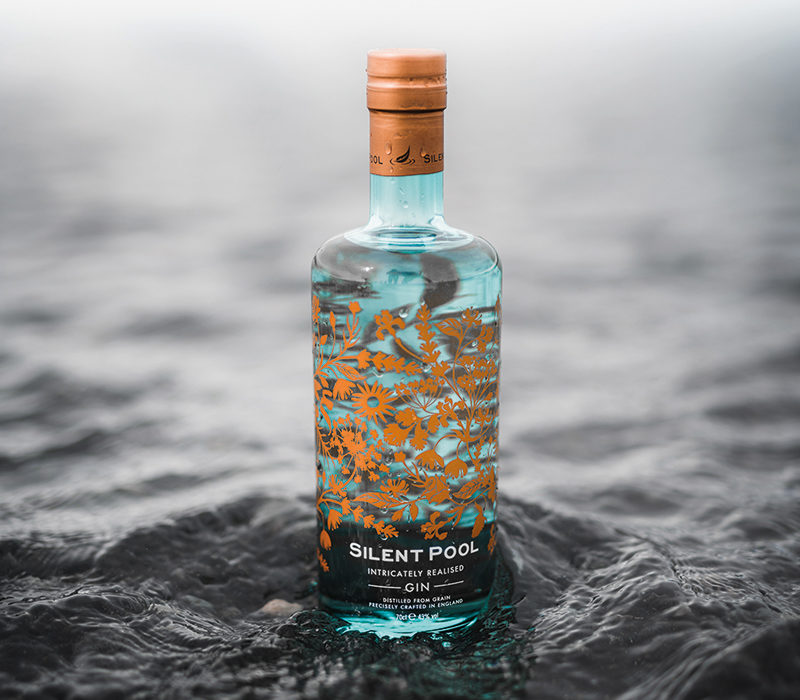 An artisan distillery based in the Surrey countryside, Silent Pool Distillers is winning customers and awards for its commitment to creating exceptional handcrafted products

As the UK celebrated the 2012 London Olympics, the groundwork was being laid for a high-end gin-production facility that would also come to be admired the world over. “When the Olympics happened, people saw modern England at its best,” says Ian McCulloch, Silent Pool’s Managing Director. “And that was our inspiration, to create a contemporary interpretation of an English classic.”

The result is a truly handcrafted gin that embraces the beauty of the British countryside, particularly its home in the Surrey Hills. Silent Pool was, in fact, Surrey’s first-ever distillery, based on the Duke of Northumberland’s Albury Estate, just a few miles south of London.

The Duke and his team have been involved from the start, helping to build the distillery next to the estate’s historic silent pool, a lake fed from a deep, natural chalk aquifer that plays a vital role in the business. “It dates back to the last ice age, and is a beautiful spot with crystal-clear water and an eerie calmness,” says Ian.

This unique location is the essence of Silent Pool Gin. “After 600 recipe iterations across 18 months, we settled on a combination of 24 ingredients,” says Ian. In the complex, final process, the botanicals are split into three groups, each treated separately before combining in an original distillation for optimum flavour.

“The result is a very interesting, layered gin,” says Ian. “It’s about subtle layers, so people pick up different flavour notes, including cardamom, coriander and chamomile, as well as floral aromas. For ‘mouthfeel’ it also features honey from hives in the biodynamic vineyard next door.”

As well as this best-selling spirit, Silent Pool Distillery produces a rare citrus gin, created with a leading authority on citrus; a range of small-batch spirits; and the eco-friendly Green Man Wildwood Gin. “It’s the world’s first gin packaged in a fully recyclable cardboard bottle, delivering a carbon footprint 83 per cent lower than any glass bottled product,” says Ian.

The distillery partners with Tree Nation to plant a tree for every bottle of Green Man sold. “The feedback has been fantastic. We have planted more than 2,500 trees so far and expect to plant thousands more.” Sustainability measures are a priority at Silent Pool, where initiatives include turning organic waste into methane then electricity; and firing one of the stills using hydro-treated vegetable oil.

The elegant product design of the Silent Pool range reflects a 21st-century Britain that has outgrown well-worn visual clichés. “We steered away from things like George and the Dragon, the Tower of London and Beefeaters,” says Ian. “It’s similar to how Rolls-Royce cars are now more than a homage to their vintage models. They’re based on those core principles, but are a modern take on a contemporary classic, and that’s where our brands intersect.”

Although most ingredients are sourced locally, the UK’s unpredictable weather means Silent Pool sources juniper berries from Bosnia, Macedonia and Bhutan, which offer the best quality juniper in the world. The team’s attention to detail in both sourcing and design has paid off. The brand exports to 47 countries, with the US, Germany, Italy, Australia and Japan among the most significant markets, while 2019 saw Silent Pool Gin win a gold medal at the prestigious Spirits Business Gin Masters. “There’s a line on the bottle that reads ‘Intricately Realised’,” says Ian. “That’s incredibly important to us. Our gin has been realised, with every stage overseen with precision, knowledge and exceptional care.”