What’s it like to be the first “civilian” to step into a prototype of Rolls-Royce’s eagerly anticipated all-electric Spectre during winter testing? Ray Massey reports 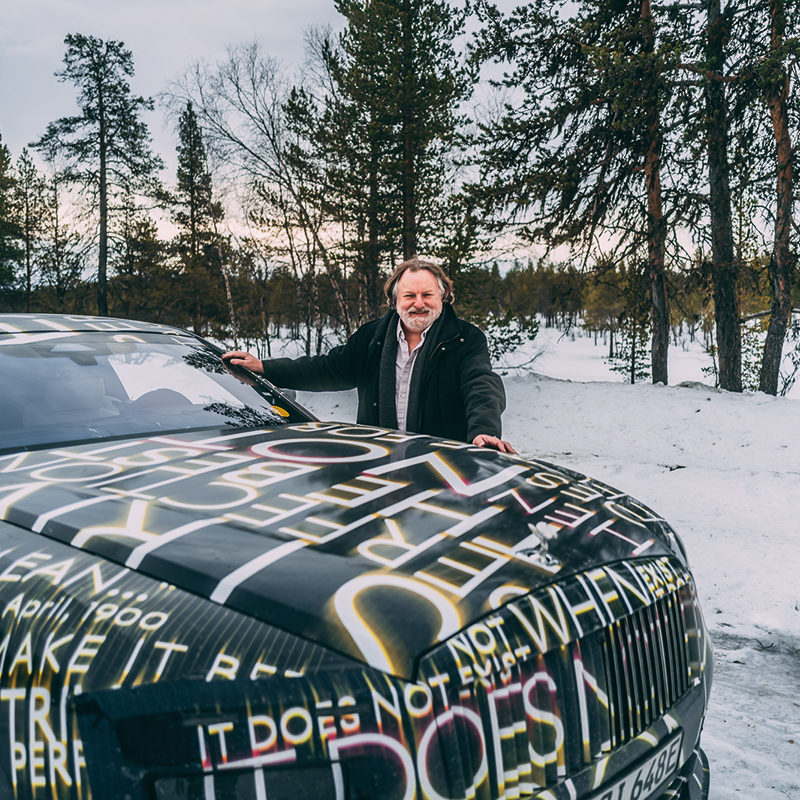 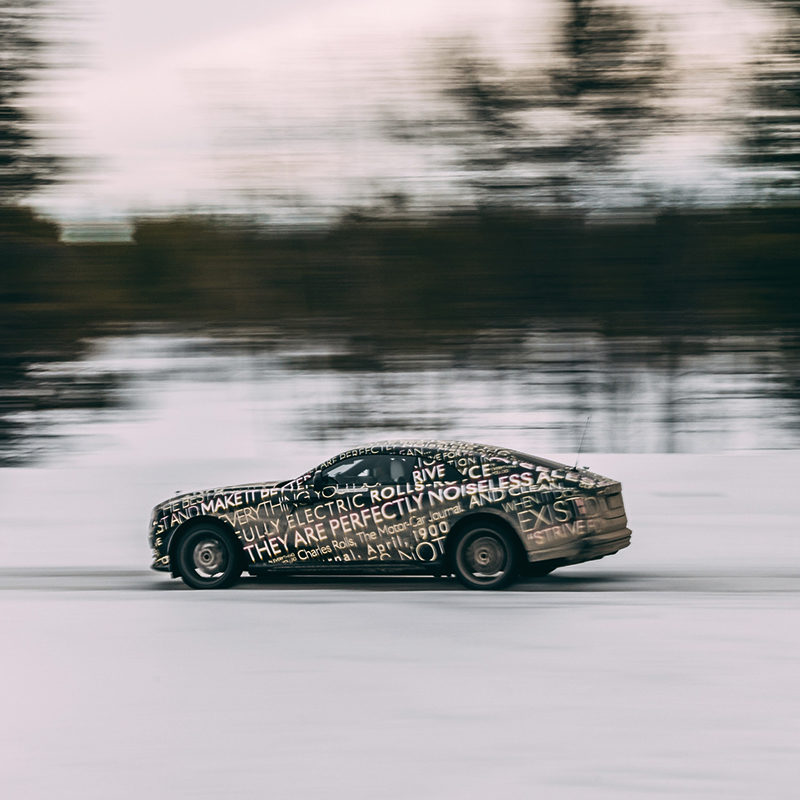 There’s a certain frisson to being first. And I had just become the very first journalist, and the first person outside of Rolls-Royce, to ride in the new, green, all-electric Rolls-Royce Spectre – the first zero-emissions battery-powered production model from the world’s most luxurious car maker.

Indeed, mine was the first posterior to grace the Spectre’s soft leather hide as the electric “super coupé” tore elegantly through a remote arctic landscape. And yes, I did allow myself a moment’s selfish gloat and a raffish giggle.

I was riding shotgun in the passenger seat of an early test prototype – and only the sixth car built – of Rolls-Royce’s new electric car as it came to the end of its extensive winter testing programme before the hot-weather trials began in spring. It was an especially significant experience as Rolls-Royce says its entire range will be battery powered by 2030 as each new model comes on stream.

I was among an exclusive party of just six international journalists who made the three-hour charter flight and hour-long drive with Rolls-Royce Motor Cars Chief Executive Torsten Müller-Ötvös to the tiny and remote village of Arjeplog in Swedish Lapland, where Rolls-Royce and its parent company BMW have a dedicated testing facility for their cars.

Think of it as an automotive Ice Station Zebra – the scientific base in the 1960s Rock Hudson movie of that name. But instead of scientists, Arjeplog is full of motor-industry engineers. And Rolls-Royce and BMW aren’t alone. Many car makers, including Volvo, Mercedes-Benz and the giant Volkswagen Group, test their pre-production cars in or around Arjeplog, or in similar sub-zero locations.

As a result, the population of this tiny hamlet swells during the winter months from around 2,000 to more than 5,000 as engineers and road-testers from major motor manufacturers fly in, occupying the small number of local hotels and log cabins.

The £16 million Rolls-Royce and BMW facility itself covers 28 hectares of land – including more than half a mile of tracks on which to test cars on a range of different surfaces and gradients – and a frozen lake, and provides the test team with access to countless miles of virtually empty surrounding roads.

I first saw the car itself being driven into one of the test facility’s garages and had a nose around from the outside. But it was early the next morning, out in the wilds, that I got my chance to experience it in motion. And my sharp Fleet Street-honed elbows helped ensure I nabbed the very first slot.

Although at first sight it resembles a Wraith, the new Spectre is being pitched as a spiritual successor to the stylish Phantom Coupé, boasting similar proportions. It has a very commanding presence with a stylish fastback and low-slung look.

A light camouflage on the bodywork – featuring quotes from Henry Royce and Charles Rolls – does not disguise the silhouette. Beneath the tape are “split” headlamps. The two-door fastback features rear-hinged doors that open outwards. From the front seat of the enveloping and cocooning cabin, it’s like sitting in a luxurious cockpit with a rakishly low windscreen and seating position, and forward-leaning stance.

Some of the interior detailing was covered but enough was visible through the deep dashboard for me to know that you can expect the highest quality of trim. And there was a surprising amount of space in the rear.

My driver for the trip was the jovial Spectre project leader Jörg Wunder – “Mr Wonder” – who confirmed with a laugh, “You’re the very first civilian outside of Rolls-Royce to experience this”.

And we were off.

With stunningly powerful but controlled acceleration, the electrified, and electrifying, car whooshed silently, smoothly and at high speed across a remote ice- and snow-bound landscape within just 34 miles of the Arctic Circle.

As the surrounding trees flashed by, the constantly active suspension and clever onboard electronics ironed out creases and bumps in the slippery surface beneath to create a seamless drive amid the beautiful lakes and forests of the farthest reaches of northern Sweden.

Powered by two electric motors – one on each axle, delivering all-wheel drive – acceleration is powerful but smooth, controlled and refined, not at all jerky. It’s sporty without being a sports car.

As we nudged 80mph on the icy roads, it felt firm and secure, comfortable and relaxing, and amazingly quiet. The Spectre was virtually silent. Not totally so – this was a prototype and there were still adjustments to be made. But for a battery-powered electric fastback, weighing nearly three tonnes and swishing elegantly from rest to 60mph in just a few seconds, it’s quite an engineering achievement. Especially when filling boots as big as a gargantuan but silky smooth V12 petrol engine.

Rolls-Royce has so far been coy about the car’s range. According to the firm, owners won’t want to do a 400-mile run from London to Edinburgh on one charge, and they are unlikely to need to recharge en route – they’ll fly instead. But I’m assured it’ll be sufficient to move around urban areas and cities, to the airport and back, and from central London to a country retreat in the Cotswolds, or from Munich down to the lakes. Most charging, the thinking goes, will be done at home or at the office.

Performance figures weren’t available as the test model is a work-in-progress. But based on my experience, they’ll be more than adequate. Top speed is likely to be capped at 155mph, but I’d guess that its spirited but smooth 0–62mph acceleration comes in at around or under five seconds. And, of course, it has zero emissions.

Spectre will also be the first coupé since the 1926 Bugatti Royale to be equipped with 23-inch wheels, though the winter tyres on mine were 22-inch.

Being electric, there is no vast petrol engine taking up space in the elongated bonnet. But the liberated volume is being used to host key electrics and wiring – there will be no “frunk” or “front trunk” for extra storage. That’s just not Rolls-Royce’s style.

However, it does have the newly designed and more aerodynamically tuned Spirit of Ecstasy statuette at its prow. And if the standard version of the Spectre is not racy enough, there will be a bespoke Black Badge version too, Rolls-Royce confirmed to me.

Spectre’s new flexible aluminium spaceframe chassis allows for a remodelling of the traditional architecture. The batteries under the floor, made up of groups of cassette-like cells in trays, don’t just provide rechargeable power, their presence helps lower the car’s centre of gravity, making it more stable. They also contribute to some 700kg of sound-deadening to reduce noise coming up from the road.

Despite its imposing physical and dynamic presence, Rolls-Royce says that Spectre is still in its infancy. Although all the key engineering is complete, it now has to be “taught” to “think and behave” like a proper Rolls-Royce, and that means carefully finessing and tweaking myriad physical and, increasingly, digital components. With its education only around a quarter complete, it is now attending “finishing school” – with some behavioural therapy thrown in – to bring it fully up to muster.

“We are teaching our new Spectre how to become a Rolls-Royce,” says Rolls-Royce Director of Engineering Dr Mihiar Ayoubi. “It’s still learning to walk. It’s in its infancy. Our task is to teach each component and system how to think, behave and communicate like a Rolls-Royce, which sees much of the engineering pivot from workshops into the digital space. Here in Arjeplog we have built a significant foundation on which we will create a true Rolls-Royce. I think our co-founder Henry Royce would be proud.”

Testing takes place not only on icy roads, but also on frozen lakes. But why test on ice at all? Rolls-Royce explains: “When the first prototypes are built, engineers perform very basic tests in extreme conditions to ensure that each system is operational and functions at a basic level in a cold-weather environment. This test is combined with the beginnings of the refinement process – the first ‘lessons’ in a finishing school.” This includes noise, vibration and harshness tests, and the efficiency of the motor car’s heating, ventilation, air conditioning and cooling systems.

But driving on ice can also slow down or “de-escalate time” says the luxury company. “By driving on low-traction surfaces, such as snow and ice, and wilfully destabilising Spectre, the engineers can create dynamic circumstances at low speeds that would ordinarily occur at high speeds.” This can be reviewed in slow motion to finesse cold-weather vehicle performance in areas such as chassis control, handling, stability, predictability, powertrain management, electronics and the near indefinable “waftability”.

Silence is a science, too. Rolls-Royce has always prided itself on the quiet composure of its “magic carpet ride”, but make the car perfectly silent and it can feel disorientating. Drivers and occupants need some feedback, so, there’s a fine balance to be struck.

As a cutting-edge car of the 21st century, Spectre is also highly digitised and the most “connected” Rolls-Royce ever, packed with intelligent components. Its electronic nervous system has more than 141,200 links. There are 1,000 electronic functions and 25,000 subsidiary functions. That means nearly 4.5 miles, or 7km, of wiring, compared to the 1.25 miles, or 2km, in petrol-driven Rolls-Royces, and 25 times more programmes or algorithms.

“Spectre is unquestionably the most anticipated product in the marque’s modern history,” he adds. “It is a symbol for our bright, bold electric future, and it represents a seismic shift in our powertrain technology.”

Rolls-Royce enjoyed the highest sales in its 116-year history in 2021 as it speeds into an electric future. But customers will still have to wait until 2023 to experience what I did in the new all-electric Spectre.

Ray Massey is Motoring Editor at the Daily Mail