Fit for a princess 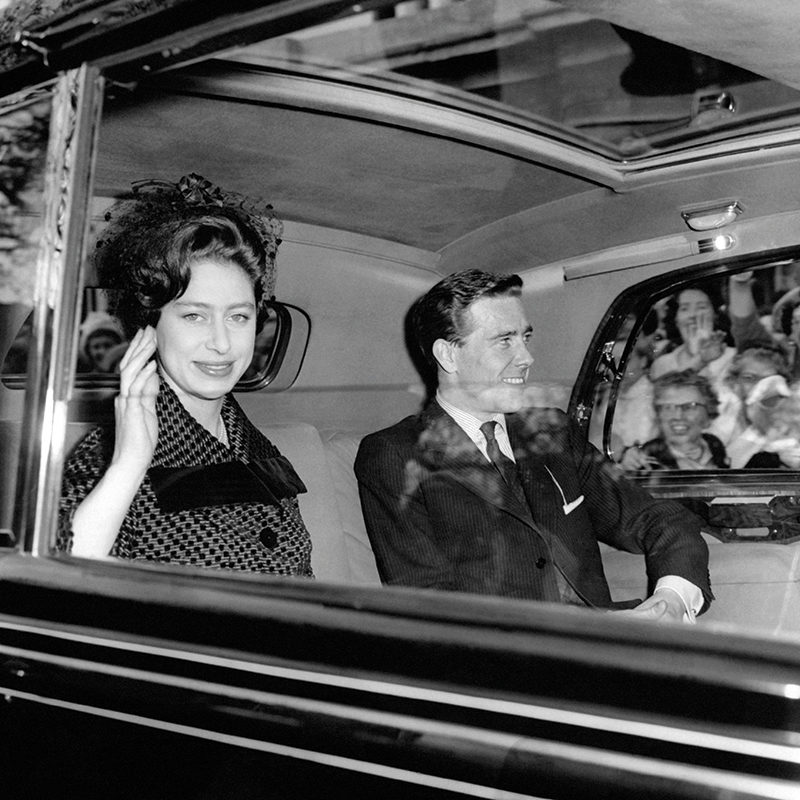 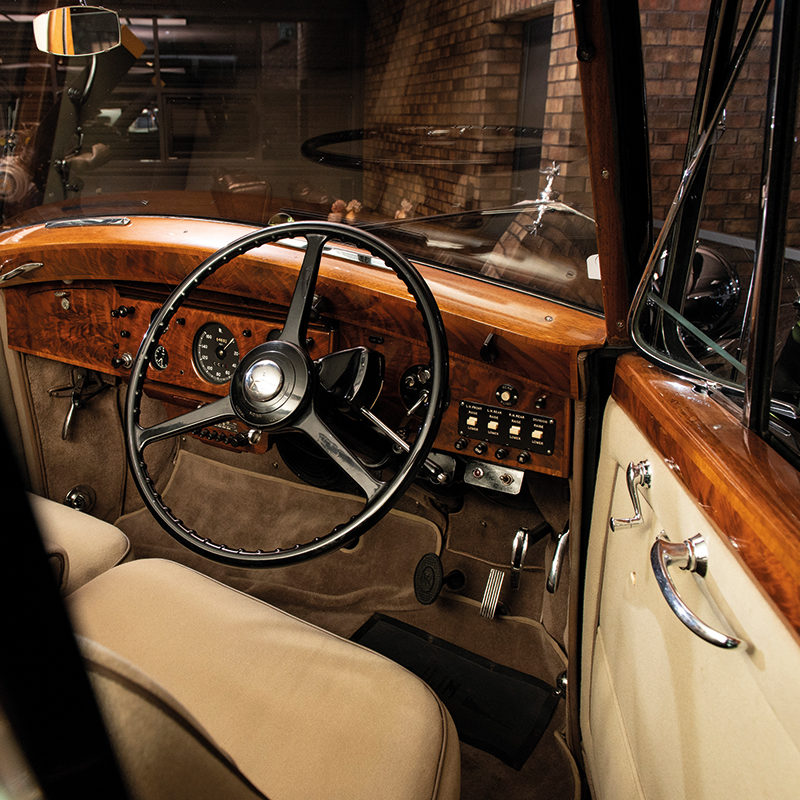 The 15th Phantom IV ever produced arrived at HJ Mulliner for the fitment of coachwork in 1954 under the cryptic customer name of “Baron Montaigne”. Rolls-Royce, however, listed its owner by her true name – Her Royal Highness Princess Margaret. Once appointed with its bespoke specifications, the car was delivered that July to Clarence House, where Margaret lived with the Queen Mother.

The most exclusive Rolls-Royce model ever built, the Phantom IV was a motor car fit for a princess. Of the 16 surviving cars, five were built for the British Royal Family, three for the Spanish government, three for the Emir of Kuwait, and two each for the royal family of Iraq and the Shah of Iran.

The first of these illustrious automobiles was made for Princess Elizabeth, the future Queen of England, and the Duke of Edinburgh, and was delivered in July 1950. Margaret’s car, chassis number 4BP7, differed a little from her sister’s. For starters, it had higher and more elongated wings, and a different hood ornament – an alternative to the Spirit of Ecstasy. The Queen’s car had two interchangeable statuettes, both designed by the British artist (and Royal Family friend) Edward Seago. Princess Margaret’s Phantom also had an original Seago design, but hers was an elegant model of a rearing Pegasus.

Finished entirely in black paintwork with a blue police light and mounts for royal heraldry and a flagstaff above the windshield header, 4BP7 was built for official use. However, it was also created for a modern princess who wished, on occasion, to be more than a passenger.

“When we got the car, we wondered why the front section was so luxurious,” says Dr Norbert Seeger, the Liechtenstein-based collector who owned Princess Margaret’s Phantom from 2008 to 2021. “Why are the front seats fitted in wool, not leather? These cars were normally all driven by the chauffeur, but Princess Margaret wanted to drive it herself. As a result, because it was set up for the princess, it is extremely easy to drive.”

The car’s steering wheel is daintier than usual, the steering position one inch shorter than standard and the column rake was set as high as possible. The driver’s seat was also fitted with a small winch that allows it to be raised a few inches. According to the modifications specified by the princess’s secretary, HJ Mulliner raised the driving seat cushion and backrest and, in case they were needed, the firm provided detachable extensions to fit the brake and accelerator pedals. It also, unusually, had an automatic gearbox – a rarity for Rolls-Royce cars of its vintage.

Rolls-Royce used ten nuts on the wheel discs, instead of the usual five as was customary in the Silver Wraith. Furthermore, 24 holes around the hub aid balance, and the wheel discs have five rubber cams near the bead of the rim to prevent shaking noise, all of which delivers unparalleled smoothness.

“There are many anecdotes and stories that surround the vehicle,” says Dr Seeger. “When I received it, the lamp covers were removed and disclosed a second bunch of keys. It is well known that the chauffeur of the car was meticulous with regard to every aspect of the vehicle, including the keys. The spare set of keys may have been put there as a security measure in case the first set of keys were misplaced.” Rumour has it, however, that the princess had the keys put there so that she could sneak out and drive the car herself without having to inform the chauffeur.

The rear of the car is particularly luxurious, its upholstery covered with doe-brown West of England wool. At night, the interior ceiling can be tastefully illuminated by means of indirect lighting, and moveable reading lamps are mounted on the sides, should they be required. A sliding roof, controlled by the press of a button, can be moved to the required position directly above the rear seat. The floor is covered with a fluffy wool fleece and is fitted with a Persian carpet. An electrically operated blind, mounted on the rear window, will protect the passenger, if necessary, from prying eyes. Additional blinds can be drawn out of the side panels – the operating knobs discreetly built into the right armrest.

The main passenger seat in the rear can be raised or lowered a few inches with a small winder, so that Princess Margaret could be more easily viewed by members of the public, and the car is fitted with two forward-facing occasional seats. In between them is a cabinet housing a loudspeaker grille and a heater outlet. Below that was a lidded storage compartment with a mirror set into the centre armrest, although this was later removed to allow the extra passengers to move around without hitting their legs against the lower part of the cabinet. Above the cabinet is a pair of cigarette lighters, with a clock built into the division rail.

Princess Margaret sold 4BP7 in 1967, and the blue police lamp and royal coat of arms on the Phantom IV’s roof were removed and put on her Long Wheelbase Silver Shadow. The royal registration plate – PM 6450 – was changed to 302 HYP and it was sold through Car Mart Dealership in Park Lane. It came to the attention of one Alfred William David Adams – better known as AWD Adams and nicknamed Ben – who ran a successful transport, garage and rental company in New Malden, Surrey.

“My father had a growing collection of Rolls-Royce cars,” says Graham Adams, son of AWD Adams, “and our local dealership in Weybridge rang him up to tell him that they had a very unusual Rolls-Royce for sale, but they weren’t able to tell us who the previous owner was. It was all a little cloak and dagger. We were quite impressed by its royal connections, but more impressed by what an extraordinary and impressive vehicle it was.”

The car – which had only 27,000 miles on the clock when it was purchased in 1967 – remained with the Adams family for more than three decades. “It wasn’t used very often,” says Graham. “We’d occasionally use it to pick up prestigious clients from Heathrow Airport, or to attend special events in London. Sometimes we’d lend it to clients or business partners we trusted, for their daughter’s wedding or something.”

One of the clients who occasionally borrowed 4BP7 was a firm called Farmcroft in New Malden, who would use it for films and TV shows. As a result, it appears, briefly, in a chase sequence in an episode of the TV series Man in a Suitcase, broadcast in 1968. It also appears in the 1969 James Bond film On Her Majesty’s Secret Service, parked outside the house of “M”.

But, generally, the car was displayed in the New Malden showroom of Adams & Adams transport firm. “That was until we ran out of showroom space,” says Graham, “and moved it into a heated warehouse. By this time, the West of England cloth was looking a little shabby. One of our tenants was unable to pay rent, but he was an expert upholsterer – we got him to reupholster the car in lieu of rent! But that was the only work we did to it – we overhauled the engine before selling it, but never touched the paintwork.”

By the turn of the century, AWD Adams had died and the family was looking to sell its Phantom IV. “To be honest, we didn’t really drive it that much,” says Graham. “It was light on the steering and was nicely balanced, but it was a beast of a car to drive around town. And you did feel a bit like a chauffeur driving it.”

He approached the Rolls-Royce and Bentley specialists P&A Wood to sell the car. “It didn’t need much work,” said the late Paul Wood, who ran the dealership in Great Dunmow, Essex, with his twin brother Andrew. “It needed a touch of paintwork, and I remember working on the corrosion around the rear wheel spats. But it was in very good condition. I’ve worked on a couple of other Phantom IVs: King Hussein of Jordan’s one, coachbuilt by Hooper, had to be restored from the chassis up – it was one of the best restorations we’ve ever done. And the Aga Khan’s one was completely rebuilt in America. But Princess Margaret’s car was in very good condition indeed.”

One extraordinary feature of the car, said Paul, was the radio equipment that enabled the princess to make calls while on the road. “The trunk was chock-a-block with radio equipment for an early carphone,” he recalled. “There was a massive receiver, valves, amplifiers, all sorts – something you only ever see with royal vehicles.”

Adams bought the car in 1967 for around £3,250 and sold it through P&A Wood in 2003 for an impressive £136,000. It was bought by American collector Bob Shaffner in Pennsylvania, who had made his fortune selling aerospace parts and already owned another Phantom IV, 4BP3, the former Prince Regent of Iraq’s car. He would acquire yet another, the incomparable Aga Khan car 4AF20 – making him the only person other than General Franco to have ever owned three Phantoms IV at the same time. In 2004 – Rolls-Royce’s centenary year – Bob was invited to present Princess Margaret’s car at the Pebble Beach Concours d’Elegance, where it shared the green with its former stablemate 4BP3, which he had sold on by then.

In 2008, 4BP7 changed hands again, having been bought from The Real Car Company in North Wales by Dr Seeger, who received special permission to re-register it to its original number plate, PM 6450. Over the subsequent years of careful ownership, it was driven and, on occasion, shown at competition, before being auctioned in June 2021 via R M Sotheby’s.

A Phantom IV is the pinnacle of any Rolls-Royce collection, and Princess Margaret’s former motor car is certainly no exception. As Dr Seeger concludes, “It is an extremely heavy car, so you have to take care at speeds when cornering. But it has superb roadholding, the controls are magnificent and it fulfils every aspect of what you would expect of a Phantom IV.”